You bet we can beat Prostate Cancer 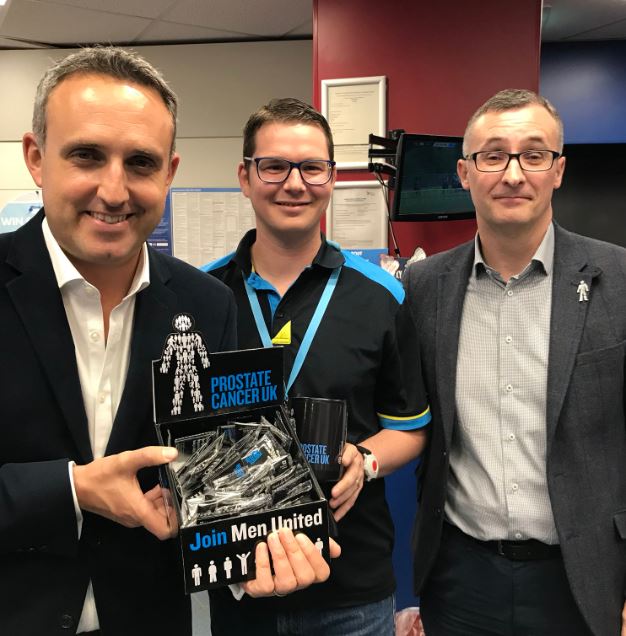 Alex is backing a campaign in betting shops to raise awareness about a disease which kills almost 1000 men a year in Scotland.

William Hill, one of the largest retail bookmakers in Scotland, is partnering with Prostate Cancer UK and industry trade association ABB Scotland this summer in a bid to provide potentially life saving information and support to men at risk of developing the disease.

Prostate cancer is the most common form of cancer among men, with one in eight men likely to get the disease at some point in their lives. However, it can often be successfully treated if caught early enough. Awareness of risk is a man’s chief defence against the disease.  Men over 50, men with a family history of the disease and black men are more at risk and should speak to their doctor if they have concerns.

Throughout the campaign, which runs until the end of August, prostate cancer information and leaflets will be available within all 310 William Hill shops in Scotland, awareness posters will be displayed on washroom doors, and all staff will receive training on key prostate cancer messages to bring up in conversation with customers. Volunteers from Prostate Cancer UK, who have lived or are currently living with the disease, will also visit shops and talk to staff and customers about their own experiences.

Fundraising is also be a key component of the partnership. Customers will have the opportunity to buy one of the charity’s ‘Man of Men’ pin badges in store or simply donate via collection tins which will be in each store. The campaign hopes to raise £20,000 in support of the charity and is well on its way to achieving its target.

Alex said: It was great to visit William Hill in Corstorphine today to hear about their partnership with Prostate Cancer UK to build awareness in their customers about the early signs of prostate cancer.

“Early diagnosis of cancer can make all the difference to successful treatment. That’s why it is so disappointing to see the Government still failing to meet their target, three years on from when they were supposed to. Despite this extra time, there is still a huge shortfall in the number of patients being diagnosed before their cancer advances. Campaigns like this go a long way to making raising awareness."

Kathleen Feeney, Team Leader - Volunteer Engagement for Prostate Cancer UK, said: “Prostate Cancer UK’s ambition is to stop men dying from prostate cancer and to achieve this it is crucial to reach as many men as possible to help raise awareness of their risk. Partnering with William Hill provides an opportunity to get these important health messages out to a large number of men in Scotland whilst raising funds.”